The year 1999 was an interesting and eventful one both personally and around the world. One of the most memorable worldwide events in my memory was heightened awareness and preparation for the millennium bug, Y2K. Companies and governments checked and updated computer systems for fear they would 'crash' at 12am, Jan. 1, 2000. This was a wonderfully profitable time for the computer hardware company I worked for until, March 1999.

But the year was also marked by many other noteworthy events:

On the personal side, little Ms. Morgan was born, an event that changed my life's perspective and as a result, Dubyts Communications was launched. We will have an official Anniversary party on September 20, 2019, but we're planning to have some fun and to celebrate all year long with visits to clients, interviews with some of our amazing staff and partners, as well as some crazy antics to mark our 20 year milestone! Watch our website and social channels for updates and give us a call/email to find out how you can get involved!

Thank you to all of our amazing and loyal clients. We're here because of you! 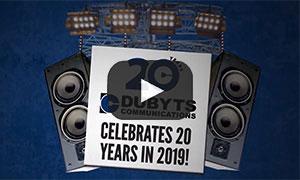 Are we right for you?

Watch our two short videos and find out what we do and if we're the right marketing company for you.

We work for YOU, not your competition

We work exclusively for a select group of non-competing clients* who are looking for unique solutions.